And would have this lead to an axis victory of WWII? 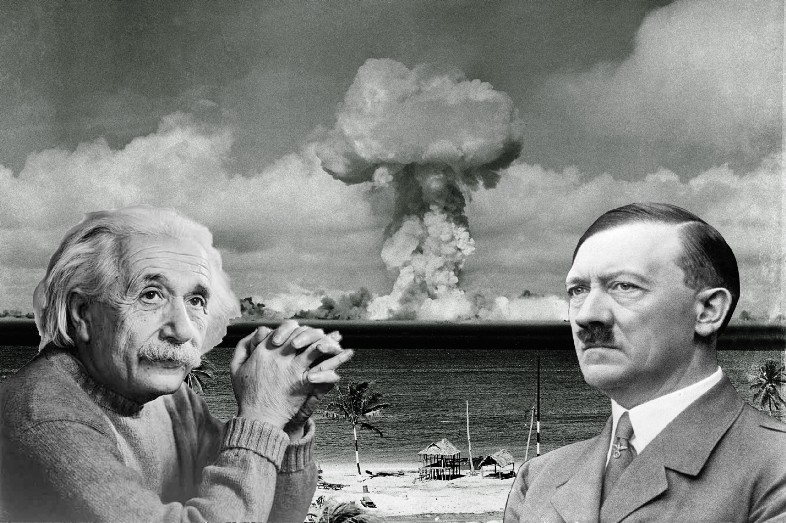 lbert Einstein has proven to be the brains of the 20th century, not only for the scientific and theoretical frameworks he came up with but also due to some of the decisions he made in the early period of the 20th century. One vital decision that was made by him was leaving Germany, as he knew that Hitler would force him to create weapons of mass destruction for him. Hitler knew that Einstein had the knowledge as well as the capabilities to build weapons that would put the Nazis at a technological advantage in case war was to break out.

In order to give you a bit more context before we dwell on the alternate side of history, Albert Einstein actually migrated to America in 1933, six years before World War II broke out. However, he was clever enough to tell that Germany would start another World War, due to the German society simply becoming too indoctrinated by the Nazi regime on specific ideology and even worst on made-up German history as well as tradition.

Although, the more direct reason for Einstein leaving Germany was because Hitler put him on the blacklist (assassination list), as Einstein did not want to cooperate or work with evil. If you want to read some more background on this please read this article I have written.

A different kind of knowledge

Now that we got a bit of background about the problem at hand, we can discuss not only Einstein’s ideology on war but also Hitler’s resourcefulness within his leadership.

Yes, there is no other way to put it, Hitler was the reincarnation of evil, however, he was a pretty good leader for managing to not only build the biggest fascist political party but also to indoctrinate a whole country which we can argue was fairly well educated, making it more resistant to indoctrination. However, the art of persuasion does not look at intelligence, or does it?

Taking into consideration that Einstein was one of the brightest geniuses to ever live, he did not get tricked by the Nazi regime, however, this may not be necessary because of his high intelligence, but more because of having a different perspective on life. The mentality of knowing that there is more to life, rather than spending a whole life to persuade a whole country that you are the best, why not spend a whole life actually becoming the best at something?

Was Einstein able to build an atomic bomb?

Now we need to get something straight, as I have mentioned in the article linked above, Einstein never created the atomic bomb, he only came up with nuclear fission which is the technology used to create atomic bombs. That is the main argument that we can have when it comes to the potential of the US Army creating the atomic bomb in 1945.

However, I would assume that given time, Einstein would have been able to create an atomic bomb. Nevertheless, we must remember that many of the great engineers at the time were still in Germany as many of them actually migrated thanks to Einstein so if he would have stayed and cooperated with the Nazis for whatever reason, they would have certainly done so too.

From a generic point of view, there is no doubt that Germany was overall the leader of the world, at least during the Second World War. This meant that they probably had the potential to create even better Atomic bombs than the “Little Boy” and the “Fat Man” used by the US Army on Hiroshima and Nagasaki, Japan, in 1945. Therefore we can assume that Einstein’s nuclear fission technology was the critical part that was missing from the hand of German scientists. Maybe this technology could have been implemented into the V2 rocket system to create a ballistic atomic missile.

From a different perspective, we also need to take into consideration that Einstein was actually a pacifist that would most likely rather die than produce anything for the Nazis, especially weapons of mass destruction. His creation of nuclear fission came about as an alternate source of power as well as for other scientific purposes, but never with the intent to weaponize this technology. At the same time we can bring into the equation the argument that without Einstein, we would have never probably seen the existence of nuclear weapons, or nuclear technology.

Just as mentioned in my previous work, I believe that Hitler would have broken down Einstein to the point where he would not have a choice but to cooperate with the Nazis, which as we have discussed would have led to the creation of the atomic bomb before anyone else. This only brings another question into this interesting equation.

This is probably the bigger question in this piece of alternate history and the more interesting one for sure. Now we need to first look at nuclear weaponry from two different perspectives. First, we have the normal perspective of a mass destruction weapon that has the potential to take tens of thousands of lives in a blink of an eye, being able to tear down whole armies in seconds. The second perspective is the psychological effect this weapon brings, not only seeing the power of said weapon but imagining the sheer fear it would put into armies, knowing that no matter how many soldiers the Red Army would have, they could be stopped in seconds.

The other factor that we need to consider in this scenario is the time when this type of weaponry would have been built by Germany. If Hitler was to capture Einstein, it would have most likely happened in 1933–1934, therefore we could argue that by 1938 the Germans could have been in the possession of at least a prototype of the atomic bomb. Knowing Hitler, even how certain he was of victory during the first half of the Second World War, he would always come up with contingency plans, whilst inefficient this might have been one that could have turned the tide for the German Army.

Let’s assume that Hitler would be clever and wait until 1944 to actually use this overpowered technology as that is the year Germany was pushed back. The main target that I would imagine would either be Stalingrad or London, not only strategic targets but also a chance to showcase a different kind of power. However, thinking about it now, the western world was not extremely amazed by the Hiroshima and Nagasaki incident, so from a psychological point of view, I don’t think that the world would have been super frightened.

Focusing back on the question at hand, if Hitler had enough atomic bombs, yes he would have been able to win the war, however, only two or three of these weapons — with my historical expertise of World War II — may have given the Germans more time, but I do not think that three nuclear bombs would have brought them victory. Let’s assume that they did take out most of Europe, including Great Britain and the Soviet Union, but they would still have to face their biggest enemy, America. Here we are talking about a different kind of power, a nation that had the manpower as well as the necessary resources to put an end to World War II.

As mentioned before, this is only an alternate scenario from World War II which I hope will entice your thirst for historical knowledge as well as for a fruitful debate in the comment section. I just want to mention once again, as it is imperative, that Albert Einstein was a pacifist and that he never intended for his scientific findings to be used as weapons.