The Truth Behind the Blinking Mummy 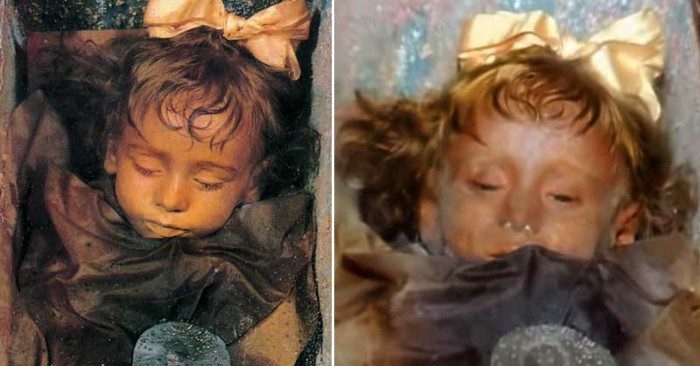 ummification, even if still practiced to this day in remote cultures, is very rare in the western world. In 1920, a little girl known as Rosalia Lombardo died at the age of two due to an aggravated case of pneumonia. Despite offering her the best medication possible at the time, she was too young and didn’t have a strong enough immune system to be able to fight pneumonia.

Her father, Mario Lombardo wanted to know the exact cause of her death in order to “blame” someone. The Lombardo family was from Italy and even if the Spanish flu pandemic was coming to an end, it seems that the girl’s pneumonia was caused by this deadly virus. The father refused to bury his daughter, seemingly extremely traumatized because of losing his child.

Rosalia’s death took place only a week shy of her second birthday. Mario was grieving so much after her death that he asked Alfredo Salafia (a well-known Italian chemist) to mummify her and keep her “as alive as possible” (looking). Alfredo Salafia was considered the best as he had a lot of experience preserving corpses.

The story of Rosalia Lombardo got to Profesor Salafia, therefore he never charged the father for his services. Rosalia’s preserved body came out looking like the most alive mummy in the world. Her young age allowed Salafia to follow a simple mummification process that kept her angel face untouched and undeteriorated for over 100 years.

In the 1970s, the notes describing Rosalia’s mummification were found. The notes represent more of a prescription for different chemicals used for the mummification:

The glycerine was used to prevent the mummified body from drying up, the saturated formol, and salicyl alcohol for killing the bacteria which formed after her death. The zinc sulfate was used to petrify the body.

The mystery of the “blinking” mummy

One strange phenomenon that scared all the tourists visiting the catacombs was that the mummy was blinking or at least that is what most people saw. Most of the people that go to visit her mummified body believe that she is a miracle since she keeps blinking even though she has been dead for a long time. It’s thought that changes in temperature inside the crypt cause her eyelids to contract to produce the blinking effect.

However, Dario Piombino- Mascali, the curator of Capuchin Catacomb’s has assured us that all that people are seeing is, in fact, an optical illusion. The paraffin dissolved in the ether, then wiped on the girl’s face, making it look like she is looking directly at those who are looking at her. This, combined with the light which is filtrated in different ways during the day through the windows of the catacombs makes the girl’s eyes look like they are open.

At a closer look, it can be seen that her eyes are not 100% closed and this was probably done with the intention by Alfredo Salafia to make her look more alive. What is even more interesting is that upon an X-ray of the mummified corpse, it seems that Rosalina’s organs have been perfectly conserved. This may just be one of the best-preserved mummies in the world, however, it is only 100 years old so it should not be the greatest wow factor.

It is interesting how we have reached a technological point that allows us to analyze such mummies without the need of them being touched or at risk of deterioration.