The Pilot Who Spent 20 Minutes Hanging for His Life

Flight BA5390 and the incredible fortune that helped avoid a disaster 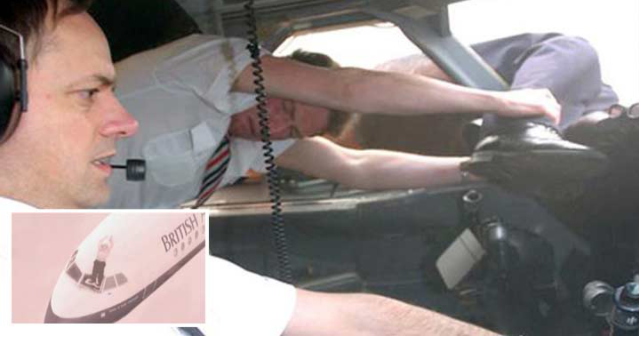 raveling by air has become something common in our present, despite still being a means of transport implemented about 100 years ago, it has made life so much easier. It has even been defined by experts as the safest means of travel. Based on the hundreds, if not thousands of flights that take place every day, having a handful of crashes every year is nothing compared to the number of car accidents that are happening on a daily basis.

Even so, with the safest means of transport, we still have a small percentage of events that occur, and flight British Airways 5390 was a unique incident in the history of commercial flying and possibly flying as a whole. BA flight 5390 was a service from Birmingham (BHX) down to Málaga–Costa del Sol (AGP), Spain’s fourth-busiest airport.

Another day in the Boring Life of a Pilot

Nothing was different on June 10th, 1990. BAC 1–11–500 was the same plane used for this flight for quite a while. The plane itself was brought into the British Airways fleet in 1988 and had been serviced accordingly. British Airways are well known for taking good care of their aircraft. This specific flight had 81 passengers including the four cabin crew members and two pilots.

Pre-flight checks have been done twice as per guidelines and the aircraft presented no technical issues. The aircraft had taken off at 8:33 AM with no issues from Birmingham airport. The level of turbulence was normal according to British weather. The aircraft was slowly climbing to gain the necessary altitude to cruise to the destination. Commercial jets would fly at around 30,000 feet (8500 meters), but BAC 1–11–500 was a smaller aircraft, it cruised at an altitude of 27,000 feet (8000 meters).

About 30 minutes after take-off, two of the cockpit windows smashed, depressurizing the cabin and sucking Captain Tim Lancaster out of the cockpit. Lancaster was quite lucky as if it wouldn’t have been for one of the attendance quick action, he would have not survived that day. Flight attendant Nigel Ogden grabbed his Captain’s ankles before disappearing out of the window. Due to the high speed and low pressure at that altitude, pulling Lancaster back was humanly impossible.

“I whipped round and saw the front windscreen had disappeared and Tim, the pilot, was going out through it — he had been sucked out of his seatbelt and all I could see were his legs,” (Quote by Nigel Ogden)

It was not just the Captain’s life on the line, but of everyone’s on the board of that flight. If Ogden didn’t catch the Captain in time, there was a high chance for the Captain to fly right into the engine of the Jet, destroying the engine and causing an explosion that would send the aircraft towards a certain nose-dive crash. This would have resulted in the death of everyone on board.

Co-pilot Atchison was trying to descend as quickly as possible towards Southampton airport in order to proceed with an emergency landing. As the co-pilot was talking with flight control over at Southampton, Ogden was starting to lose his grip. Another flight attendant named Simon Rogers realized that Ogden was not able to hold the Captain for another 15 minutes until the plane landed, so they used extra seatbelts to tie the Captain’s legs to the chair.

Whilst all of this was happening, Lancaster was forced by the speed of the plane to sit in the same position. The shirt of him ripped from the powerful speed combined with high winds from the high altitude. One of the worst parts is that for the whole time he wasn’t able to shut his eyes, so he had to constantly see potential death in the sky.

“Most terrifyingly, his eyes were wide open. I’ll never forget that sight as long as I live.” (Quote by Tim Lancaster)

At about 8:50 AM, the plane had successfully landed at Southampton airport and Lancaster was able to come back into the cockpit. The emergency services had waited for the plane to land and give first aid to the Captain. He was lucky to escape with his life and only a few small injuries. The medics also acknowledged that thanks to the quick descent, he was not deprived of oxygen. If the co-pilot would have kept the plane longer at 27,000 feet, the Captain could have died from the lack of oxygen.

At the end of the day, everyone made it home safe. In this photo, you are able to see the whole crew around their Captain who has minor bruises around his chest and arms. The crew has worked together to not only keep their Captain alive but everyone else on that flight who was at great risk.