The Ancient Ritual of Being Baptized in Blood

Joining the good or the bad? 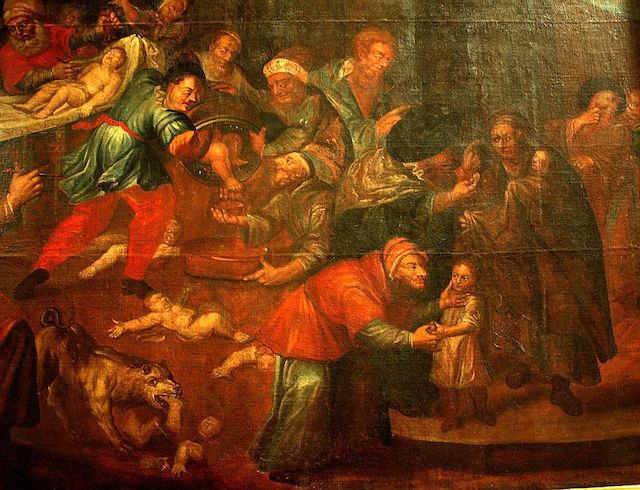 lood baptism was one of the essential elements of the ancient oriental mysteries. The ritual combines the specific aspect of sacrifice with those of baptism. In the conception of the inhabitants of antiquity, the blood of slaughtered animals was considered to have a great purifying value. Based on this belief, the priests — high priests, but also with a political role — sprinkled with blood not only on the walls of the temples and the objects of worship but also on the participants in the initiation ceremonies.

The animal to be sacrificed (bull or ram) was placed above a ditch and was adorned with garlands of flowers. The newborn, wearing a gold crown on his head, descended solemnly into the pit called “the tomb of the initiate”. The blood of the sacrificed victim flowed through the eyes of a witness and the body of the one who wanted to join the servants of the god of life.

After some time, the initiate appeared before the crowd that would pay homage to him, thus emphasizing the importance and sacred character of blood baptism.

The layman entered the sanctuary like the one who was about to die, and when he came to the surface, his body and clothes soaked with blood, the participants of the ceremony looked at him as a man who rose for eternity. Belief in a new birth required the bloodthirsty to feed only on milk.

The concept of the regenerating assimilation of blood (which gave rise to the ritual of blood baptism) and the subsequent deification of the initiate is based on primitive elements that are found in almost all archaic religions. Some legends from ancient times say that our body is able to absorb blood through the skin, and this helped newborns with already-developed white blood cells. This is why they believed that after being baptized, you should feel an energizing and revigorating breeze representing the touch of God.

The sacrificed animal represents the divinity itself, and the absorption of the victim’s blood symbolizes the reception of the vital force of the god. Despite the fact that the ritual is attributed to permanent effectiveness, it must be repeated after a well-established period of time (usually after about twenty years).

Of course, most religions/cultures see this as very unorthodox as associating a religious ritual with blood may represent a demonic ritual rather, however, many forget that ancient religious rituals (from various religions) required those who partook in the ritual to sacrifice blood (bloodletting).

The ancient ritual of being baptized in the blood is actually supported in the old testament:

This also goes together with an old saying, “Baptism by fire and blood”. But truly, if we take a closer look at Christianity we can see that all three — Water, Fire, and Blood — are part of the baptism process, or at least used to be.

Water refers to confession, the first main view understands baptism as a confessional act expressing salvation. This is seen in Romans 6 as baptismal identification with Jesus from death to life. Unfortunately, this is pretty much all we ever get from Evangelicals concerning baptism.

In a more confusing way, fire refers to filling. The second main view focuses on the Holy Spirit, that we must also be baptized/filled by the Holy Spirit for the fullness of sanctification and for empowerment for ministry. This is seen in Luke’s writing primarily, that Jesus comes to baptize by Spirit and fire (Luke 3:16), and does this very thing on the day of Pentecost when the disciples are “filled with the Holy Spirit” (Acts 2:4).

This can also be seen and better understood from our simple way of life, as without these three elements (Water, Fire, and Blood) we could not live as humans. From these elements, we also have created everything we have the luxury to touch and use towards making our lives easier.