The 11-Year-Old Girl Who Was Orphaned at Sea 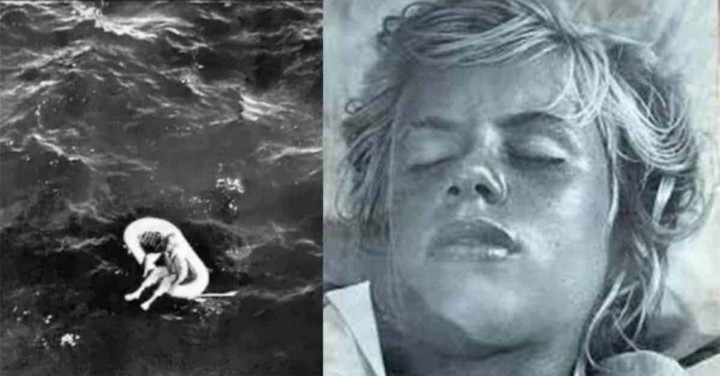 here are quite a few stories of people and even children stranded at sea through history, but this one stands out because of the tragedies Terry Jo Duperrault had to endure before being stranded at sea for three days. At the time of the tragic event, Terry was only 11 years of age and quite a shy girl.

The family was originally from Wisconsin, one of the colder states which justifies the family’s desire to go to exotic places with a warmer climate for a change. The rest of the family was made up of Terry’s mother Jean Duperrault, her brother Brian who was 14 years old at the time, and her sister Rene who was 7.

Their destination was the Bahamas where they wanted to reach on a nice ship. In Fort Lauderdale (Florida) they met up with Julian Harvey (an old friend of Arthur) and his wife Dene who joined them for the cruise. The Duperrault family chartered the boat and Julian was to be the captain that would sail the ship as he had experienced as a skipper. Julian was a WWII veteran so he seemed trustworthy and also good at sea.

Julian decided to set sail on the 8th of November in 1961 during the nighttime. Although this seemed a bit strange the Duperrault family trusted him so they set sail on the ship named Bluebelle and everyone was feeling great.

A night full of murder

The cruise was going great and everyone was having a good time. Five days had already passed and everyone was enjoying life at sea, especially Arthur, who was living his dream. Despite all this, there was an unsettling sense that something wasn’t ok in Terry’s eyes.

On the fifth night, Terry woke to the screams of her brother coming from the deck of the ship. She rushed over only to see the most horrific scene, best described in her own words:

“I ran on top of the deck to see what happened. I saw my mother and brother in a pool of blood.” (Quote by Terry Jo Duperrault)

Just imagine the mental shock this would have on an 11-year-old girl upon seeing her siblings as well as parents dead. She was so scared that she ran back into her bed hoping it was all a bad nightmare.

Terry decided to go back on the deck to see where her younger sister and father were. The only person left on the deck was Julian who pushed her back below deck. Julian threw a canoe on the water where he placed the corpse of his wife and took off but not before sabotaging the ship to sink.

From her theory, Terry thinks that Julian didn’t spare her as he was assured she would drown in the sinking ship.

At the time Terry knew nothing of why her family was murdered but she was sure that Julian was the murderer. Later on, the story was unfolded by investigators. Dene Harvey had life insurance worth $20,000 and Julian wanted that money. He was so desperate that he was willing to kill her as he gained the trust of the Duperrault family who would also assume that it was an accident.

However, Arthur caught Julian killing Dene, so he had no choice but to get rid of all the witnesses, therefore he murdered the whole family and left Terry thinking that she would drown.

Julian encountered a cargo boat that saved him. He explained to the crew that the ship he was on encountered a devastating storm that destroyed the ship and that his wife had died whilst the other members had drowned at sea. Julian went back to U.S. soil where he buried his wife.

Terry was stranded in the middle of the sea with no food or water. She was so devastated about her family’s death that she didn’t see any hope of surviving or encountering a ship that would save her. All she could think about was the sharks at the bottom of the sea waiting to eat her.

Another problem for Terry was the hot sun that provoked nausea as she had nothing to cover herself with. Dehydrated and devastated, her fate was already set.

After 84 hours of being stranded at sea, luck was on her side as a cargo ship discovered her. The Greek cargo ship was controlled by Captain Theo who could not believe his eyes at first sight. Never in his life had he seen a person stranded at sea.

He even said that it was amazing news to be more convincing, although in his head he knew that the rest of his life would be spent behind bars once Terry recovered and confessed everything.

On the 16th of November, Julian Harvey was found in a motel room dead after he committed suicide. The authorities never had a chance to sentence him for the murders.

The survival story of Terry became famous worldwide as she was published on the cover of LIFE magazine in 1961. In 2010 the story once again attracted attention and author Richard Logan wrote a book about this whole ordeal named Alone: Orphaned on the Ocean.

The book offers very detailed information about the story and especially about how Terry was affected by the events that took place in 1961.

Can you just imagine having your whole family taken away in one day whilst being left in the middle of the ocean to die at the age of 11? We must admire such people who have endured such tragedies in life for finding the power to move forward and find the courage to speak about it.