Popeye the Sailor Man Was Inspired By Real People

Who was this popular cartoon character inspired by? 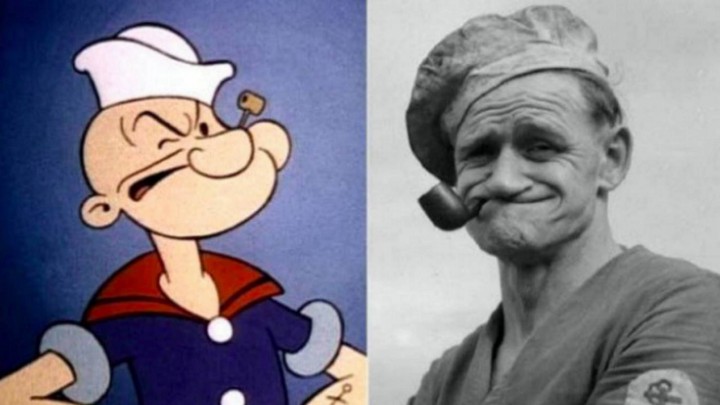 ou would think that just like any other cartoon character created in the past, Popeye the sailor man was also invented in someone’s imagination but that is not the case. Popeye was actually based on a real person whose characteristics are similar to the ones presented by the cartoon character.

The “creation” of Popeye

Popeye is quite an old cartoon that I vaguely remember from when I was a small child, but this old cartoon has been adopted and redeveloped over the years by various television companies. The man behind the cartoon character was Elzie Crisler Segar, a famous cartoon designer that was working for the New York Times.

In 1919, Segar was asked by the New York Times to come up with a new cartoon character that would pop to the younger generations. Segar was from a town called Chester in Illinois, USA, in which there were many interesting personalities that he would adopt into his cartoons.

J. William Schuchert was another famous character created by Segar and was actually inspired by the owner of the local theater in Chester. The same thing happened with the creation of Popeye the sailor man.

The inspiration for Popeye was Frank Fiegel, nicknamed by the locals as “Rocky”. Frank was born in 1868 and he migrated with his family from Poland to America when he was young. For most of his life, he worked as actually as a bartender and not a sailor, although he always talked about wanting to sail around the world.

He was bold, he had a strong chin, thick arms and he smoked like a chimney. He would always wear a striped sailor’s t-shirt, his cap and never leave his home without his smoking pipe in his mouth. A natural deformation of his face was that he had one eye bigger than the other, that is how he got also the nickname “Pop-Eye”.

Although he loved to get into fights as people considered him to be abnormally strong for his physique and age, he also loved being kind. These same characteristics are presented in the Popeye cartoons by the character. Segar met Frank at a local bar in Chester where he immediately knew that this was his dream character.

His heart was also big as he loved to play with the kids around Chester and tell them stories, this is something that inspired Segar. The character really exploded and appeared in 500 newspapers around America and later on in the 1930s even reached worldwide attention.

The other unknown inspiration

Sadly Sager died at the age of 45 in 1938 and in 1947 so did Frank Fiegel. However, the way Popeye was portrayed in the early 1900s isn’t the same as what he has become later on. Popeye was originally known as “Popeye the coast guard” and not the sailor man. This is because other cartoonists found another person who defined the appearance of the character.

His name cannot be found in the records but it is believed that he passed away during the Second World War whilst fighting the German navy. This picture redefined the original Popeye making him the brave sailor man and also being in the navy helping cartoonists with more inspiration for cartoons including Popeye.

If you are wondering if any of the two “Popeyes” consumed high amounts of spinach, there was never a mention, it is said that the idea behind spinach giving power to Popeye was created in order to encourage children to eat more spinach.