Hitler and Stalin’s Alliance at the Beginning of WWII

A week before the start of WWII, Germany and USSR signed a Non-Aggression Pact. As time went by, it became clear that it was more than that. 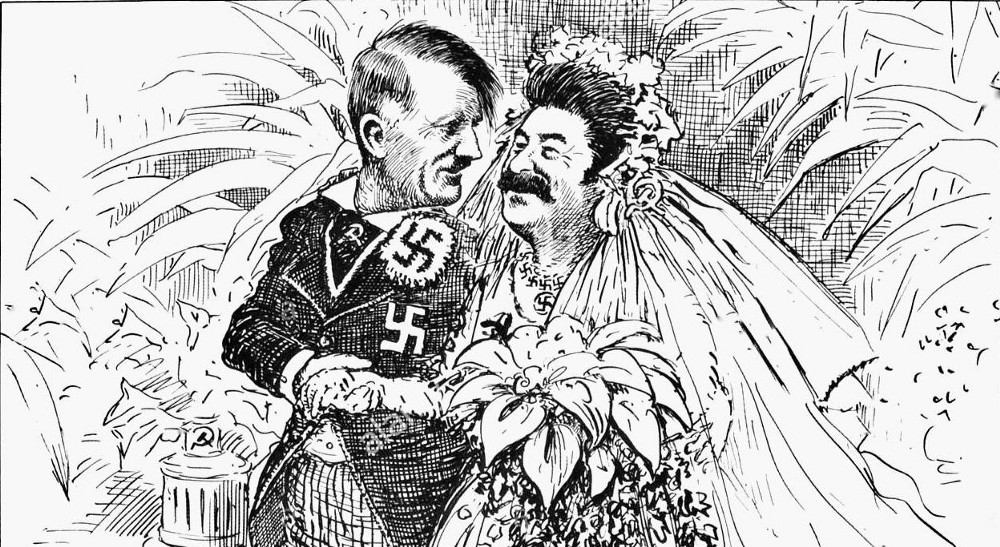 eptember 30, 1938, the Munich Agreement was signed in the capital city of Bavaria by Nazi Germany (Hitler), the United Kingdom (N. Chamberlain), the French Third Republic (E. Daladier) and the Kingdom of Italy (Mussolini). The Agreement’s core content was the resolution of the Sudeten crisis. Since 1933 Hitler had been claiming Sudetenland’s possession, as that Czech territory was mainly inhabited by German speakers. On September 12, 1938, Hitler threatened England and France to be willing to proceed with the violent annexation of that territory.

That would have meant a further, maybe the ultimate, step towards an European war. The Italian dictator Mussolini proposed himself as a mediator between Nazi Germany on one side and the liberal democracies of England and France on the other. Pursuing the appeasement policy, both Chamberlain and Daladier acquiesced in giving the green light to Hitler. Everything was decided with the absence of Czech authorities. At the end of the Munich Conference, Chamberlain made his famous unlucky declaration: “I believe it is peace for our time”.

Excluded from the conference that eventually resulted in the Munich Agreement, the Soviet Union started worrying about Germany’s movements towards Poland and Eastern Europe more generally. The fact that these movements were taking place with England and France’s agreement was even more alarming. Stalin knew that he couldn’t count on the two liberal democracies in case of a Nazi assault as they seemed to be determined in pursuing their appeasement policy. Furthermore, the Soviets were deeply unpopular among the British and the French because of their Communism.

As time went by, the Soviets, the British and the French realized that Hitler’s diplomatic activity was no more than a pretense. In 1939 it was evident that Nazi Germany was getting ready for a war in which the Soviet Union would have been surely involved. At this point in time, the choice for Stalin was between a deal with Hitler, which promised to isolate Russia from the oncoming inter-capitalist conflict, or an alliance with London and Paris, which would have ensured Russia’s early entry into the second Great War. Obviously, Stalin had no choice but to negotiate a non-aggression pact with Germany even though it was clear that it wouldn’t have lasted, since Hitler had always been clear about his plans for Eastern Europe (i.e. the Lebensraum, the “living space”).

On August 23, 1939, Germany’s Foreign Minister von Ribbentrop and Soviet Union’s Foreign Minister Molotov signed the Molotov-Ribbentrop Pact (also known as Hitler-Stalin Pact). Signed in Moscow following a negotiation attended by Stalin himself, the Pact is formally remembered as the “Treaty of Non-Aggression between Germany and the Union of Soviet Socialist Republics”, but, by reading the articles that constitute it, it becomes clear that the Pact was a lot more than a Non-Aggression Agreement.

The Molotov-Ribbentrop Pact, Non-Aggression or Alliance?

Let’s see, for instance, the first article of the Molotov-Ribbentrop Pact.

“Both High Contracting Parties obligate themselves to desist from any act of violence, any aggressive action, and any attack on each other, either individually or jointly with other Powers.”

In this article Molotov and von Ribbentrop agree on the impediment, for both USSR and Germany, to support militarily (or economically) its contractor’s foes. This is not a conventional article for a Non-Aggression Pact; instead, it is quite common to find such an article in a Neutrality Pact. Anyway, some might think that this article doesn’t prove the existence of an alliance between Russia and Germany, but just a neutrality. Let’s go on with the third article.

“The Governments of the two High Contracting Parties shall in the future maintain continual contact with one another for the purpose of consultation in order to exchange information on problems affecting their common interests.”

Usually, Non-Aggression Pacts don’t require the exchange of information between their signatories. At least, it is not common to put this kind of article into this kind of Pact. Furthermore, in the fifth article we read the following:

Some might still argue that there is no evidence for this alleged alliance. Anyway, undoubtedly Germany and Russia’s relationship wasn’t just a non-aggressive relationship. Basically, a Non-Aggression Pact includes a promise by the signatories not to engage in military action against each other, there are no provisions for “exchange of information”, “friendly exchange of opinion”, etc. However, what might seem ambiguous so far will become pretty clear with the text of the Secret Additional Protocol, signed by the two countries together with the proper Pact.

The most interesting article is the second, in which we read the following:

“In the event of a territorial and political rearrangement of the areas belonging to the Polish state, the spheres of influence of Germany and the U.S.S.R. shall be bounded approximately by the line of the rivers Narev, Vistula and San.

The question of whether the interests of both parties makes the maintenance of an independent Polish state desirable and how such a state should be bounded can only be definitely determined in the course of further political developments.

In any event both governments will resolve this question by means of a friendly agreement.”

Such a well-described arrangement regarding the spheres of influence of the two signatories of the Pact is nowhere to be seen in a common Non-Aggression Pact. The article says that these dispositions have to take effect just “in the event of a territorial and political rearrangement of the areas belonging to the Polish state”, but if it is just possibility, then why are Germany and Russia describing accurately how Poland’s boundaries will change?

As a matter of fact, more or less one week after Molotov and von Ribbentrop signatures on the contract, Germany invaded Poland and started the Second World War. On September 17, the Soviet Union broke through Poland’s Eastern borders and executed the Pact’s provisions. The Wehrmacht and the Red Army even fought side-by-side during the Battle of Lwów, in which the Polish city was surrounded by the two armies (the Germans on the Western side and the Soviets on the Eastern one).

This Secret Additional Protocol ends with its fourth article, that states:

“This protocol shall be treated by both parties as strictly secret.”

The End of the Pact

Germany unilaterally terminated the Molotov-Ribbentrop Pact on June 22, 1941, by launching a massive attack on the Soviet Union in Operation Barbarossa. The territories gained by the Soviet Union as a result of the Pact were lost in a matter of weeks. Until that moment, anyway, the two powers never stopped having economic relations. Germany, subject to a blockade carried out by England and France, used to receive raw materials from Russia in exchange for weapons and military technology. Despite its conclusion, the Pact was clearly something more than a Non-Aggression Pact. Perhaps it was an alliance, perhaps it wasn’t. Anyway, the relationship between Germany and the Soviet Union determined the beginning of World War II, in which Hitler seemed to be close to the victory and Stalin seemed to be able to survive a “capitalist war” that so much damage had brought to Russia in the Great War case.