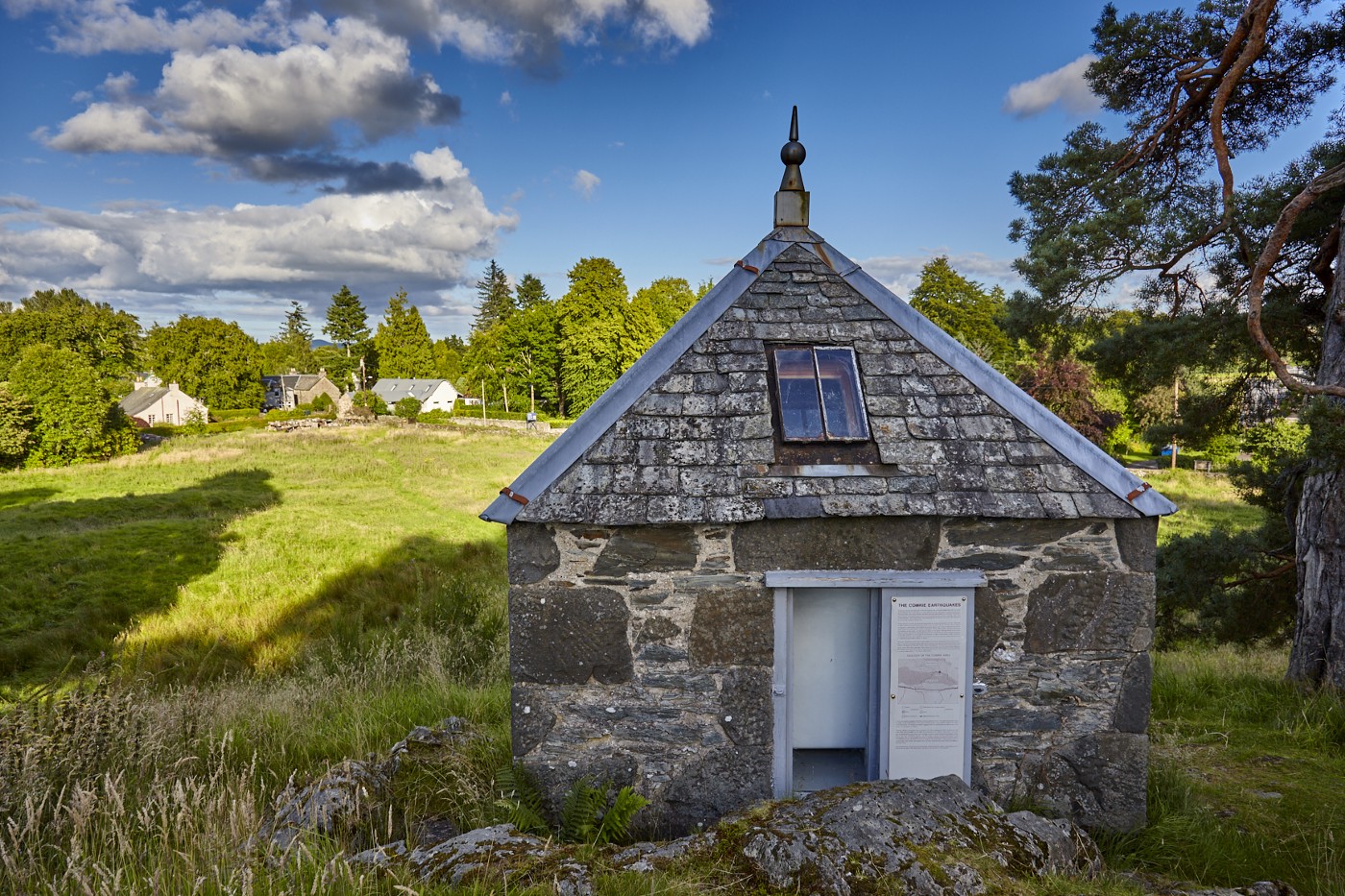 didn’t matter how hard I tried, nothing moved. I stamped my feet. Nothing. I jumped. Nothing. Thinking I needed more weight, I picked up my heavy rucksack and jumped again. Still nothing. I peered through the glass, my nose squashed flat against it so my eyeballs were a couple of millimetres closer, in the hope of spotting even the smallest of movements. But on the floor, standing on a small boxwood cross, the wooden cylinders remained upright. Against the far wall, only six feet away, the pen on the modern seismometer sat poised for action, rather than recording any action. There’s never an earthquake around when you want one.

Earthquake House squats on a rocky outcrop, half way up a grassy slope, in a field on the outskirts of Comrie, in Scotland’s Perthshire. Its name suggests a grander affair than it is, for it is no more than a small stone hut, with a pyramid slate roof, perched underneath the shady boughs of a Scots Pine.

It was built on the instructions of the Committee for the Investigation of Scottish and Irish Earthquakes, which was established over 180 years ago, in 1841. Overwhelmed by the data collected by several Comrie residents, and drawing upon the scientific discoveries of another Celt across the Irish Sea, the committee realised that proper earthquake investigations were needed. And so the world’s first purpose-built earthquake monitoring station was built.

Comrie has a long track record when it comes to earthquakes, hence its nickname: the Shaky Toon. The first recorded quake in Perthshire was noted by a James Melville in his journal in 1597, but it’s not until the late 18th century that better records were kept.

Rev. Ralph Taylor, who lived four miles east of Comrie, in the small hamlet of Ochtertyre, catalogued the tremors and his observations between 1789 and 1791. On 5th November 1789, he noted an earthquake that:

‘was strong enough to shiver the ice on a sheet of water near Lawers House.’

In 1791, Rev. Taylor left the district, but the Rev. S Gilfillan moved into Comrie and documented his experiences. Like Taylor, Gilfillan recorded what happened and when, but he also noted observations about the earthquake itself.

‘a smart shock and a very loud noise at Comrie. The movement in this earthquake was vertical, though apparently horizontal in previous shocks. The trembling noise, which did not last so long as usual, seemed to begin directly below the village and ended suddenly.’

Rev Gilfillan catalogued at least 68 tremors between 1792 and 1822. This is a significant number in one small place for a country not on a major fault line, like California’s San Andreas fault. Even today, modern equipment only records up to 300 earth tremors across the whole UK in an average year, although people are only aware of about ten per cent of them.

For 13 years after 1826, seismic activity quietened down considerably in Comrie, until the Great Earthquake of 1839. It struck on 23rd October at 10.15pm and was felt across most of Scotland. However, in the village of Comrie, residents felt numerous tremors in the three weeks prior to this quake. It was these tremors that led two more of Comrie’s locals to catalogue their own experiences: the shoemaker James Drummond, and Peter Macfarlane, the local postmaster.

They both noted minor tremors on October 3rd, 7th and 9th, but on the 10th Peter Macfarlane recorded ten separate earthquakes,

‘of which the strongest occurred at 1pm, 3pm and 4pm.’

James Drummond recorded not ten earthquakes, but five earthquakes and five noises of the earth moving, often noted as ‘earth-sounds’.

Although he agrees with Macfarlane’s earth tremors of 1pm and 3pm, Drummond claims to have felt the earth move at 2.30pm, 3.00pm and 4.30pm.

On the 12th a larger shock was felt, strong enough to dislodge slate tiles from houses in Comrie, and some stones from walls in the immediate area.

‘The shock was preceded and accompanied by two loud noises of long duration,’ Macfarlane noted. ‘The trees on the road between Comrie and Lawers were at the time wet with rain, which was thrown off by the shock.’

Both men recorded minor shocks on a daily basis, often several times a day, between then and the Great Earthquake of 23rd. It was a frightening event. It was cold and dark, and the ground moved like it had never moved before.

Drummond and Macfarlane recorded that:

‘several chimneys were shattered and chimney pots thrown down, some walls were cracked, or dry stone-dykes were overthrown.’

As well as recording the effects of the tremors, these Comrie Pioneers, as they became known, also noted what was happening during the earthquakes.

With no mechanism for officially monitoring earthquakes, or measuring their strength and intensity, Drummond and Macfarlane created their own device for recording tremors. It consisted of a wooden cross, made from boxwood, upon which they placed wooden cylinders of various thicknesses.

Carefully placed, so that one falling cylinder wouldn’t inadvertently knock an adjacent cylinder, they chose cylinders of different thicknesses as a means of measuring the strength of the ground’s vibrations. Any falling cylinders would be caught and held in place by sand surrounding the device. They constructed several of these, placing them at various points around the village.

Although basic in design, it worked. On October 26th 1840, in the early evening, Drummond felt a vertical movement in the ground. ‘The instruments erected at Comrie were affected by this shock, two of them indicating upwards movements of ¾ and ½ inch, respectively. In a third, designed to measure horizontal movement, the lower end made a furrow in the flour half an inch from the centre.’

In 1841, drawing upon all of their data, the two men wrote a report, which they submitted to the British Association for the Advancement of Science. It was this paper that led to the creation of the Committee for the Investigation of Scottish and Irish Earthquakes, which became responsible for finding accurate instruments and devices for recording these tremors.

Although several different devices were tried and tested, another Celt, James Forbes, created an instrument that we might recognise as a seismometer today. Best described as an inverted pendulum, a pencil was attached to the end of a pole, over which was placed a dome, lined with paper. The theory was that when the earth quivered, the pencil would move around the dome, recording its movement on the paper. The bigger the earthquake the more movement the pencil would make.

Six of these inverted pendulums were installed in Comrie, each with different length poles. Results were mixed, although they successfully registered some tremors. On 10th March 1841, at 4.45pm, the Committee noted there was ‘a rather strong lateral shock felt at Comrie and to a distance of 15 miles. The two inverted pendulums (39 inches and 128 inches long) at Comrie had their points thrown half an inch to the west.’

Although these pendulums showed promise, they weren’t perfect. The Committee couldn’t determine what impact the friction between the pencil and the paper was having on the results. But in 1844 the earth stopped moving.

Across the Irish Sea, in Killiney, south of Dublin, Robert Mallett and his son John were undertaking experiments of their own. They were trying to prove that the energy created when the earth moved could be witnessed as it travelled through the ground. In October 1848, to test out their theory, they buried a keg of gunpowder on Killiney beach, and retreated half a mile before detonating it.

Mallett’s seismometer projected crosshairs onto a bed of Mercury, the movement of which was monitored through a microscope. The experiment worked, with Mallett devising a series of calculations determining the speed of the energy’s movement depending upon the type of rock through which it was travelling. In 1857, Mallett travelled to Italy, in the aftermath of the Great Neopolitan Earthquake, one of the most devastating earthquakes known to man at the time, in which over 10,000 people died. He recorded the destructive after effects of earthquakes, being one of the first to capture them photographically.

During 1869 and 1870, Comrie shook to several more tremors. The Committee decided to construct a building dedicated to the monitoring of earthquakes: Comrie’s Earthquake House. It housed the latest Mallett seismometer. Sadly, this coincided with another reduction in seismic activity in the area, although occasional tremors were still felt every couple of years. By now, the world’s scientists were making further inroads into understanding why and how the earth moved.

In 1912, the discovery of the Highland Boundary Fault, the geological division between Scotland’s Highlands and Lowlands, running from Helensburgh in the west to Stonehaven in the east, which passes within a mile of Comrie, helped explain why the town shifted on its foundations more frequently than the rest of Scotland and Britain.

The theory of tectonic plates constantly moving around the Earth was first mooted at the beginning of the 20th century, but it wasn’t until the 1950s and 60s, that the theory was proved and the world’s major fault lines identified.

Our understanding of earthquakes today has been hugely influenced by the pioneering Scottish and Irish Celtic community, and scientists agree that no other town has contributed so much to the cataloguing of British earthquakes as Comrie. Between October 1839 and December 1841 Macfarlane recorded 203 earthquakes: an average of two a week.

Sitting down on the bare rock beside Earthquake House, I gaze across Strathearn and over the tops of Comrie’s cottages. The setting sun offers a tranquility and peacefulness that seems impossible to shatter.

All is calm, and I consider the road users on the nearby A85 whizzing by, probably unaware of the seismic contribution this small Celtic town played in the history of earthquake study. I pat the ground, acknowledging the irony. The frequent tremors catalogued by Comrie’s pioneers helped put today’s understanding of seismology on the solid foundations. 507-Year-Old Clam May Be the World’s Oldest Living Being
Sadly, killed by humans in the process of being analyzed Read more People Ate the Dead During the Siege of Leningrad
1,500 people were accused of cannibalism during that period Read more