Bajau Tribesmen Can Hold Their Breath Underwater for 13 Minutes 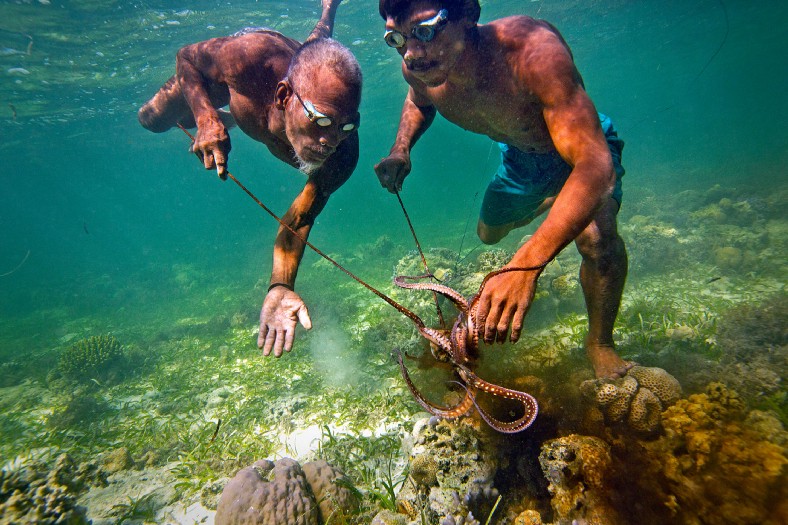 here are some truly amazing people around our world, especially people that live within remote tribes that had been following a strict lifestyle with no changes for thousands of years. However, there is one tribe that stands out from them all as its people have developed a super ability.

The Bajau tribe was only discovered by the world during the 18th century, when they were living in the areas of Maritime Southeast Asia. Throughout history, they have been nicknamed “Sea Nomads” or “Sea Gypsies” because they live on houseboats on the sea and they never settled on to a proper home on land. The population of the Bajau tribe is quite big actually, but many have chosen to live their lives on land or at least on river banks.

For many years this tribe has been living only by fishing whilst diving. It is said that during their fishing session they spend 60% of the time underwater. These people have been literally born to dive and due to this lifestyle, which has been within their roots for centuries, their bodies have adapted to the environment with each generation.

These people are literally dependent on their ability to hold their breath for such a long time as that is the only way they can catch fish which not only provides a food source but also their only financial source to trade for other goods that they require.

The oldest records found about the Bajau tribe date back to 15,000 years ago, living the same sort of lifestyle as they live today and also giving them plenty of time to genetically developed this ability. But what is exactly different within the bodies of Bajau people from the rest of us?

A normal person is usually able to hold their breath underwater for around one minute, so having the ability to hold your breath for 13 minutes and dive at depths up to 70 meters with no diving equipment is more than impressive. People that hold their breath for long periods of time have years of practice using different techniques, but the tribe people of Bajau are born for this.

One of the more secluded Baju tribes is found near the Kaledupa island in the south region of Indonesia. Although the tribe is near an island, all of their houses are built on the sea, you can say that this is the only village built on a sea in the world.

This amazing ability was discovered by many photographers and explorers that traveled to these ends of the world to see the lifestyle of the Baju people, but there had been no scientific study to justify a genetic evolution that allows them to hold their breath for so long until 2018.

Melissa Ilardo, a Ph.D. candidate from the University of Copenhagen who wanted to research what is the cause for this ability, was told by her supervisors that it would be a waste of time, however, she was so intrigued by it that she went her own way with the help of two other researchers, Eske Willerslev and Rasmus Nielsen from the same university.

Her theory was that these “Sea Nomads” had been genetically adapted to their living environment and something within their bodies has changed, allowing them to hold their breath for so long without any exercise.

The study was done by taking blood samples from 59 Bajau villagers and comparing them with the DNA of 34 Saluan individuals and 60 Han Chinese. One gene stood out for being very different which is PDE10A. This gene is especially found in the thyroid gland which controls the release of hormones. From further research, it seems that the gene makes the thyroid release more hormones which cause the spleen to grow bigger.

In the already existing literature, there has been the hypothesis of the spleen plays an important role when it comes to holding breath underwater for a long period of time, but this study proves the hypothesis to be real as this study looks at the genetic level of this theory. Ilardo and her team did not only find this but also many other genes that are quite different from the “normal population” to study, which will be presented by the research team later this year.